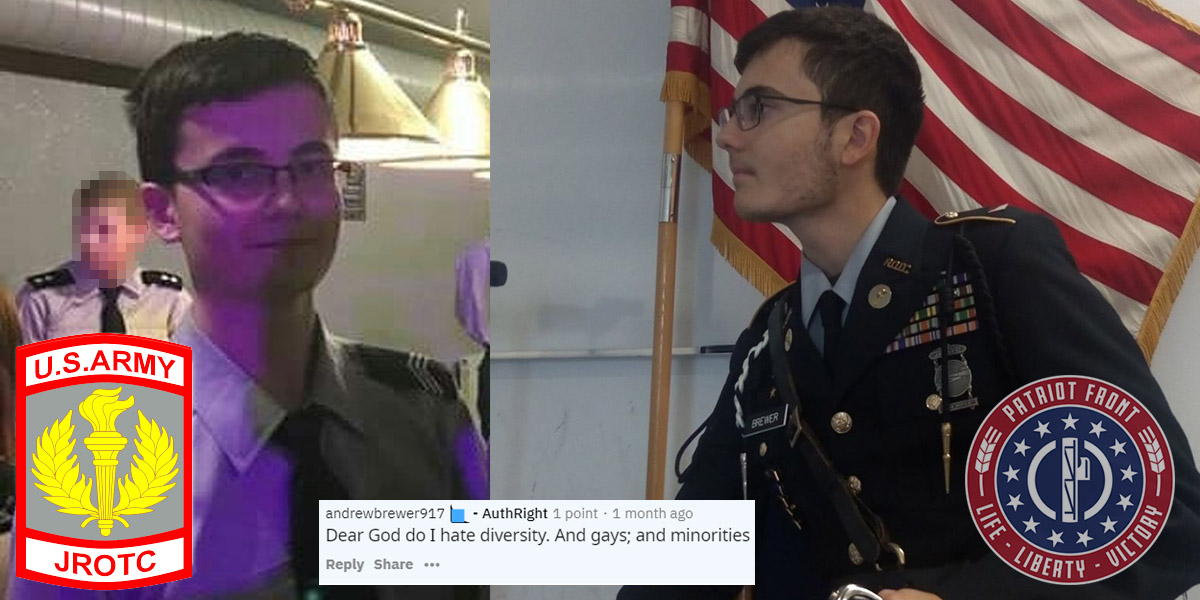 Andrew Brewer is an 18-year-old fascist Junior Reserve Officers’ Training Corps cadet at Hohenfels Middle/High School and an incoming freshman at George Mason University in Fairfax, Virginia. Andrew attempted to the join the white supremacist hate group Patriot Front three separate times before his 18th birthday. He regularly describes himself as a fascist, and makes hateful comments about LGBTQIA+, Jews, and minorities on internet forums such as Reddit and Quora.

Additional information about Andrew Brewer can be found here.

Andrew Brewer attempted to join the SPLC-designated hate group Patriot Front in March of 2020, but he inadvertently gave his information to an anti-fascist honeypot instead.

Patriot Front (PF) is a youth-oriented white supremacist organization founded after the deadly 2017 “Unite The Right” white nationalist rally. In the aftermath of the event, Patriot Front split from Vanguard America, who are responsible for the murder of Heather Heyer. PF advocates for the ethnic cleansing of the United States in order to make it a “homeland” for white people.

Reaching into A Honeypot

Andrew made his third attempt at joining Patriot Front via a Twitter DM on March 27th, 2020 from his account @andrewbrewer917, this time though, he wasn’t talking to PF.

Andrew then participated in a phone interview about his membership in what he thought was Patriot Front.

Andrew on why he wants to join Patriot Front

The exchange between Andrew and someone he thought was a member of Patriot Front’s leadership continues via email: 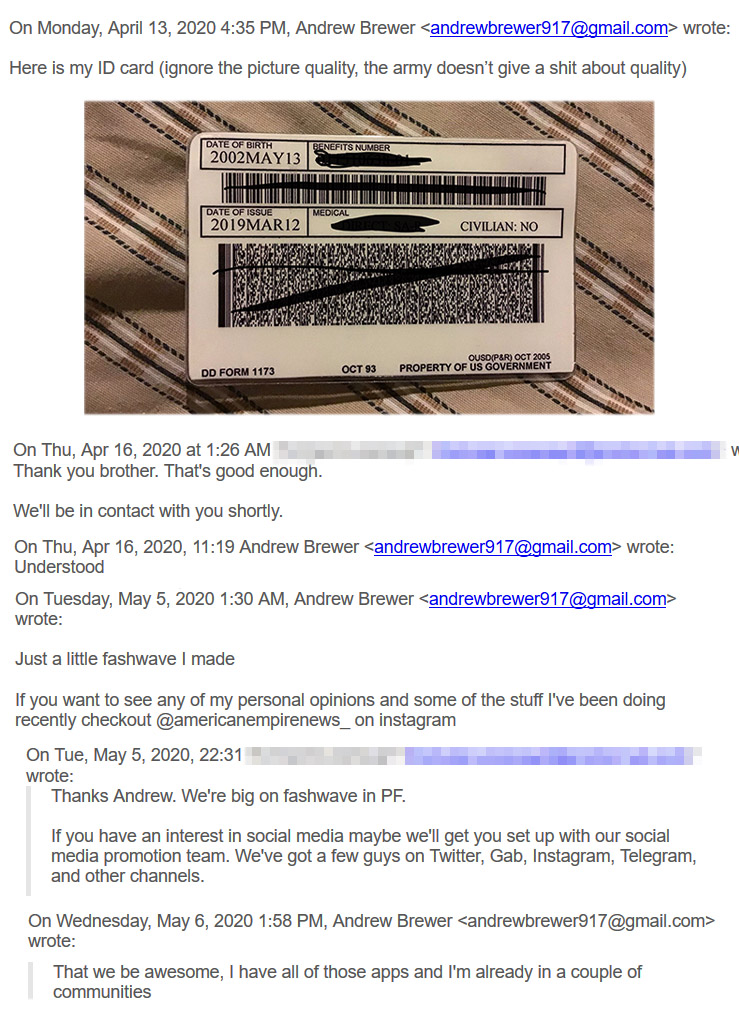 In the interview, Andrew describes himself as a “paleoconservative/neo-Fascist,” because “neo-Nazi” is a little too on the nose.

Question: How would you define yourself politically?

He calls for a near-complete closing of borders in Europe because he’s upset there are Africans in London and Paris.

Question: What do you think about what’s happening in Europe and the US in regards to migration?

Question: Tell me about England and France.

Andrew likely reached out to Patriot Front because he couldn’t find any serious Nazis locally.

Question: Since you’ve been living in Germany, have you met any other people with similar beliefs to you?

Andrew uses the same username across all of his social media, from Facebook to Stormfront.

An older version of Andrew’s Facebook shows that he attends Hofenfels Middle/High School, which is a US Army JROTC school in Hohenfels, Germany. 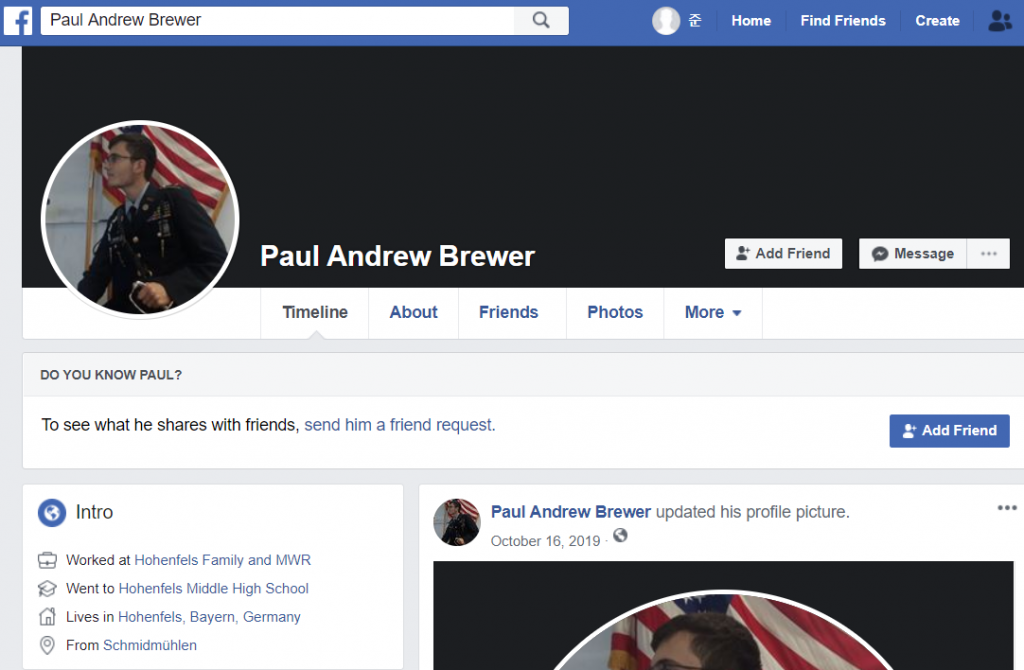 It should be no surprise at this point that a lot of neo-Nazis like Donald Trump, and indeed, here’s Andrew describing his support for the President.

Question: What Are Your Thoughts On Donald Trump?

Interestingly, when asked about Israel, Andrew gives a very tepid response, but shows an eagerness to become further indoctrinated into antisemitism by Patriot Front.

Question: What Are Your Thoughts on Israel? 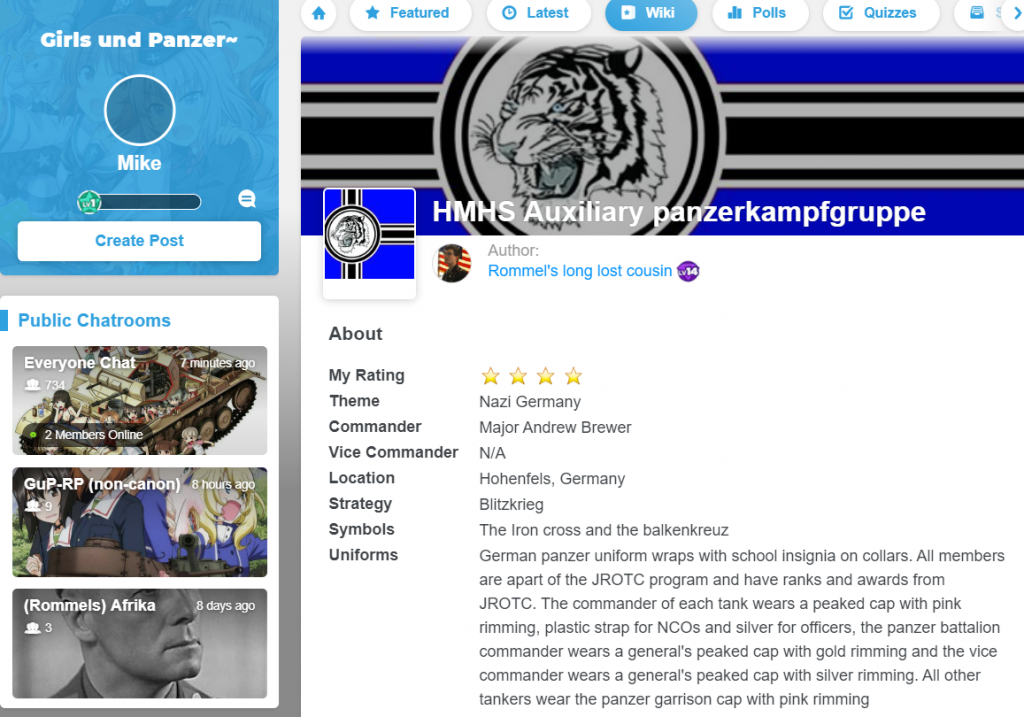 The flag for Andrew’s group is a combination of the Nazi War Ensign and the Hohenfels Middle/High School logo. 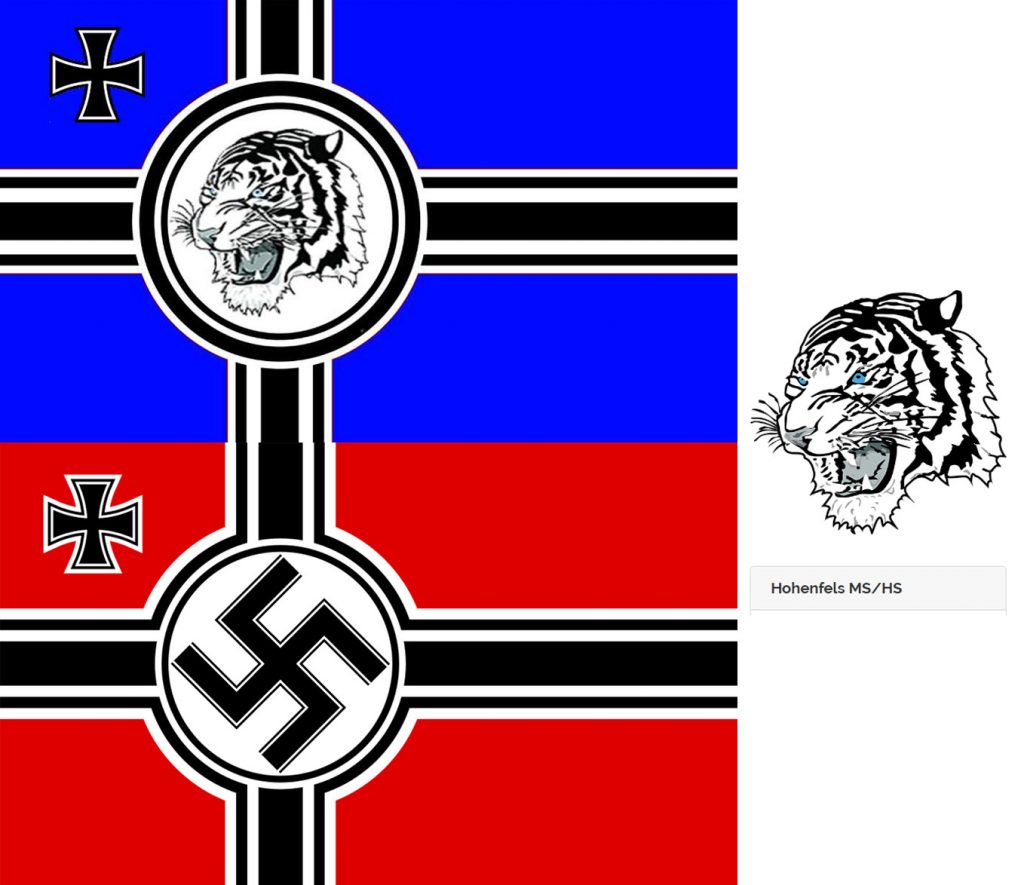 The flag Andrew is flying is the German Imperial War Ensign. Andrew shared another picture of this flag on his Reddit account, next to some Patriot Front stickers, a fedora, and a swastika. 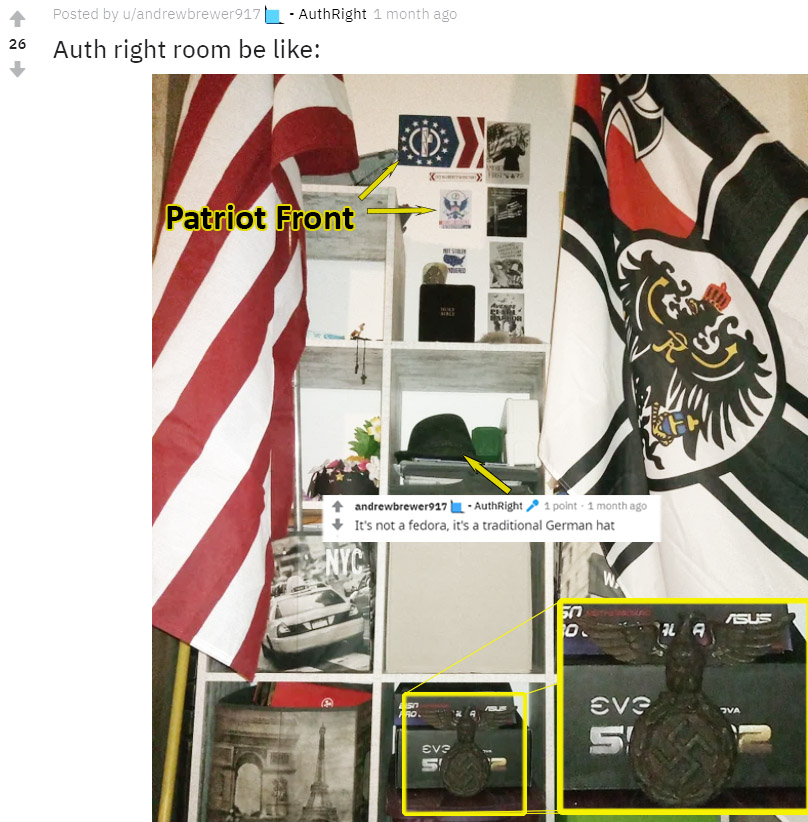 Andrew lamented that sharing photographs of swastikas is illegal under German law in his Patriot Front interview.

Question: What Are The Laws Around Fascism in Germany? 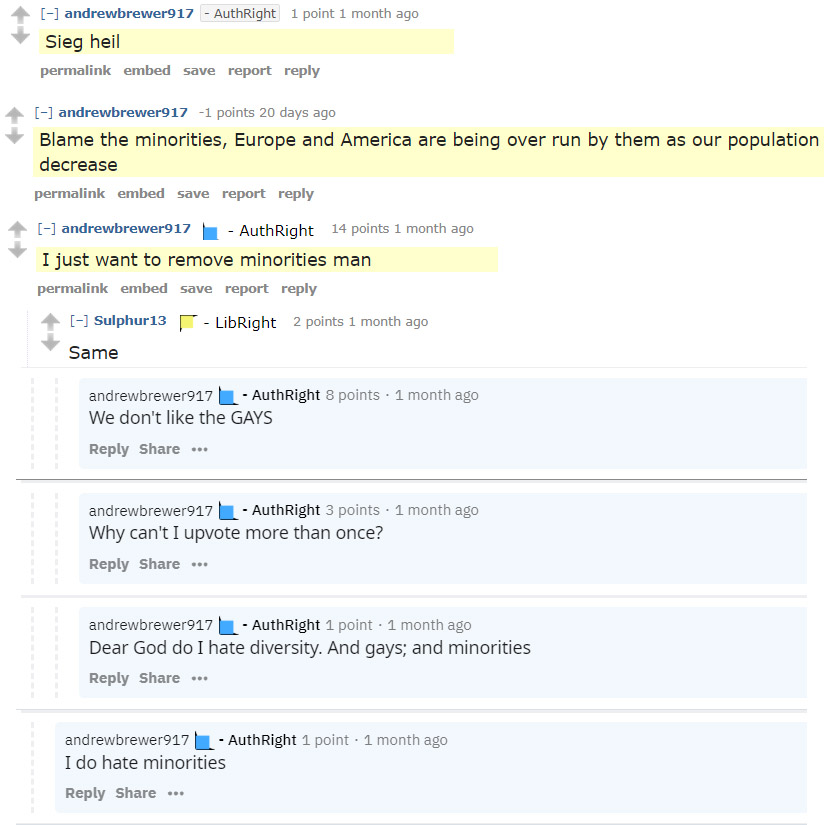 You can see a full archive of Andrew’s Reddit posts, including his birthday wish to Adolf Hitler, here.

Speaking of Hitler, Andrew said he was reading Mein Kampf in his interview when asked if he had read any of Italian fascist Julius Evola’s writings.

Question: Have you read any Julius Evola? 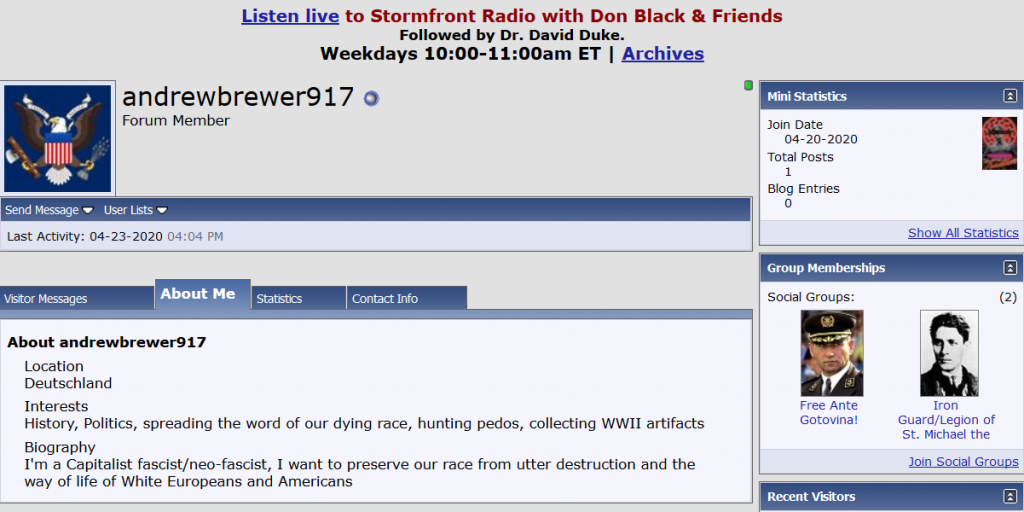 Andrew was rejected from George Mason University after students pressured George Mason into revoking his admission.

Here’s Andrew claiming he can feel a connection with Corneliu Zelea Codreanu, the founder of the fascist Romanian Iron Guard