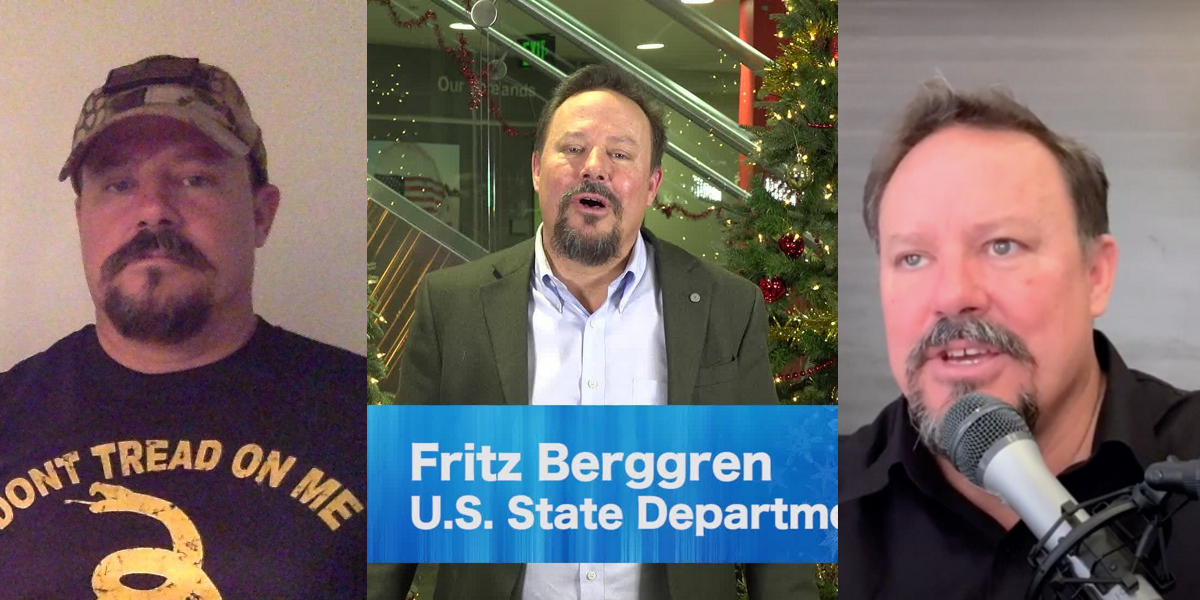 Earlier this week, Politico outed U.S. diplomat Fritz Berggren as the author of a virulently antisemitic Christian nationalist blog called Blood and Faith. Berggren’s hatred is not limited to Jewish people; he also uses his blog to rail against POCs, Marxists, Antifa and BLM, the ADL and the SPLC, progressives, the UN, and secular society as a whole, deeming these groups Satanic and anti-white. He is a vocal advocate for white, Christian ethnostates.

The level of vitriol and hatred Berggren levels against Jewish people is incredibly disturbing and difficult to comprehend. Take the quote below, for instance.

“Jesus Christ came to save the whole world from the Jews — the founders of the original Anti-Christ religion, they who are the seed of the Serpent, that  brood of vipers.  The [sic] invent traditions and precepts and elevate them over the word of God.   They murdered Jesus Christ. How then can they be God’s chosen?”

By calling Jews “the seed of the Serpent,” Berggren references a belief called the two-seedline doctrine. Held by some Christian Identity adherents, this doctrine states that states Jewish people are descendants Cain, whose birth resulted from the sexual union between Eve and the serpent in the Garden of Eden.

According to this ideology, it is not only Jews who are excluded from Christendom, but all non-white people. White Europeans are seen as the only true “Christbearers.”

Berggren’s white supremacy is on full display in the following screenshot, where he states “Christianity ought to be the White religion.”

For more information on Christian Identity and its influence on white supremacist movements in the so-called United States, give Chapter 2 of Robert Evans’ audiobook The War on Everyone a listen.

Another Fascist Republican Voter in Colorado

Not only has Berggren neglected to delete his blog, but he has continued to post antisemitic, hateful rants in the days since Politico’s story dropped, thanking the news outlet for the publicity and welcoming his new readers. So, we took the opportunity to do some digging. And, would ya look at that? This recent post from February 22nd is signed, “Colorado.” 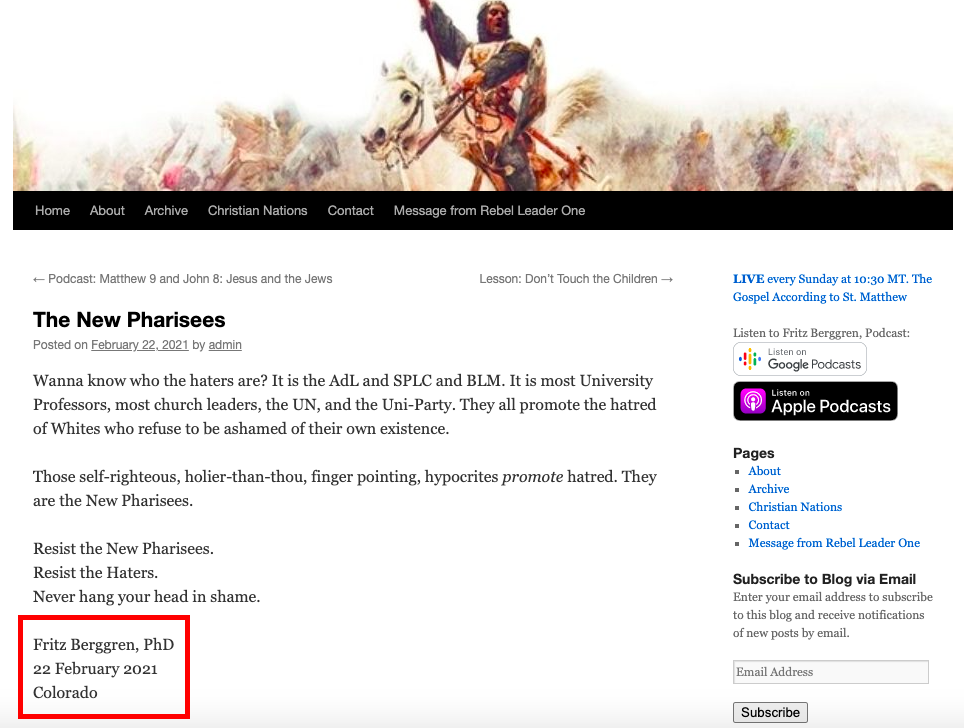 Featured on the DoD’s website is a video of Berggren from 2018, in which he wishes viewers a merry Christmas and promotes the North American Aerospace Defense Command’s Santa tracker. (This seemingly innocent footage really loses its charm when you realize the guy is an open proponent of a white, Christian ethnostate.) The video’s caption places him in Colorado Springs.

We were not the first to notice that Fritz is a Colorado resident. Dave Flomberg, writing for the Colorado Times Recorder, noted on February 27th that Berggren is a registered Republican voter in El Paso county. Flomberg notes that the Foreign Service officer wrote a Facebook post in January stating that he was living overseas, however this predates the Bloodandfaith.com post signed “Colorado.”

From there, it was just a matter of tracking down his voter registration. More information on Fritz’s whereabouts can be viewed here. 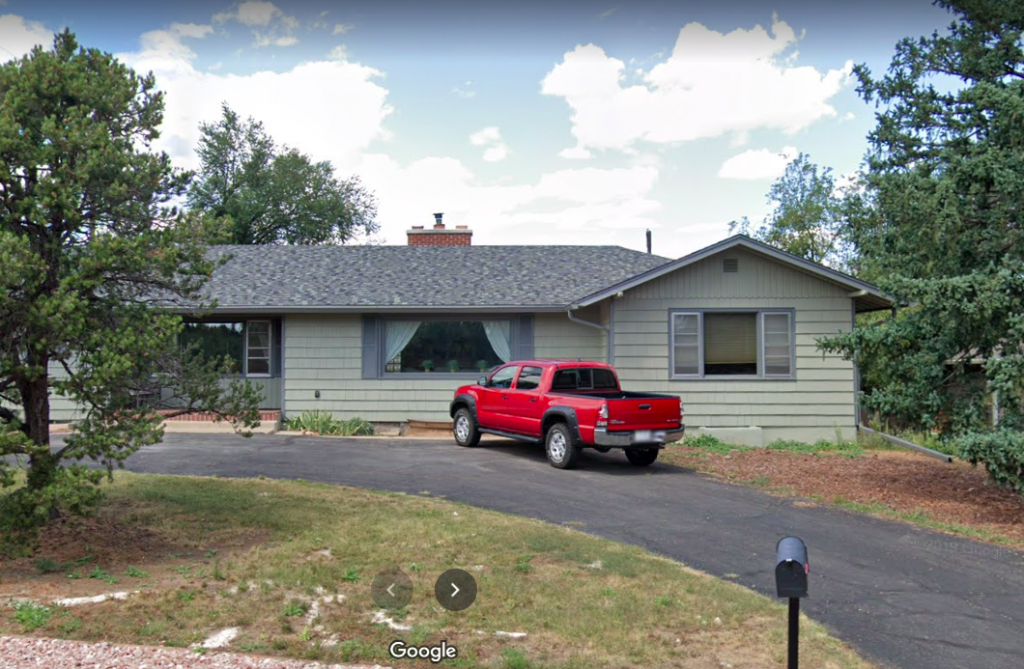 A Nazi at the State Department

Dave Flomberg of the Colorado Times Recorder also unearthed some disturbing posts from Berggren’s personal Facebook page, including the one below.

As you can see in the screenshot, this post is set to public. Most of the content on Berggren’s page can be viewed by anyone on Facebook. According to Politico’s article, Fritz’s blog dates back to at least 2017. His Facebook header photo promotes his fascist website.

Not only does Fritz blatantly promote white, Christian supremacy on his public Facebook page and blog, both openly linked to his legal identity, but he is also a Youtuber and podcaster. His channel has the explicit purpose of “Building Christian Nation-States by teaching sound philosophy and theology.”

What are the chances that none of his State Department colleagues ever noticed that their buddy was a rabid white nationalist?

That’s right. A religious extremist neo-Nazi who views the creation of white, Christian nation-states as his life’s purpose has authority over Muslim migrants from Afghanistan hoping to come to the U.S. The details of Fritz’s position were a mere afterthought in Politicos’ piece, but this deserves much more attention given his Islamophobic and anti-immigration sentiments.

Berggren does not discuss Islam on Bloodandfaith.com nearly a much as he attacks Judaism, but he views the faith in the exact same light—as Satanic and anti-Christian. He writes, “Judaism and Islam are just different forms of Satan worship, with their moons and stars and rejection of Jesus Christ.”

The State Department has refused to indicate whether any disciplinary action is being taken against Berggren. Meanwhile, he has continued to promote his disgusting ideology without shame. We are outraged that it has taken so long for Berggren’s white supremacy and antisemitism to be exposed. We are deeply concerned by the possibility that this fascist has abused his power at the State Department, and there is no doubt in our minds that Berggren’s friends and colleagues have been complicit in allowing him to spread his genocidal beliefs without consequence. After at least three years of shamelessly flaunting his Nazism, it’s time to make him, and all fascists like him, afraid again.