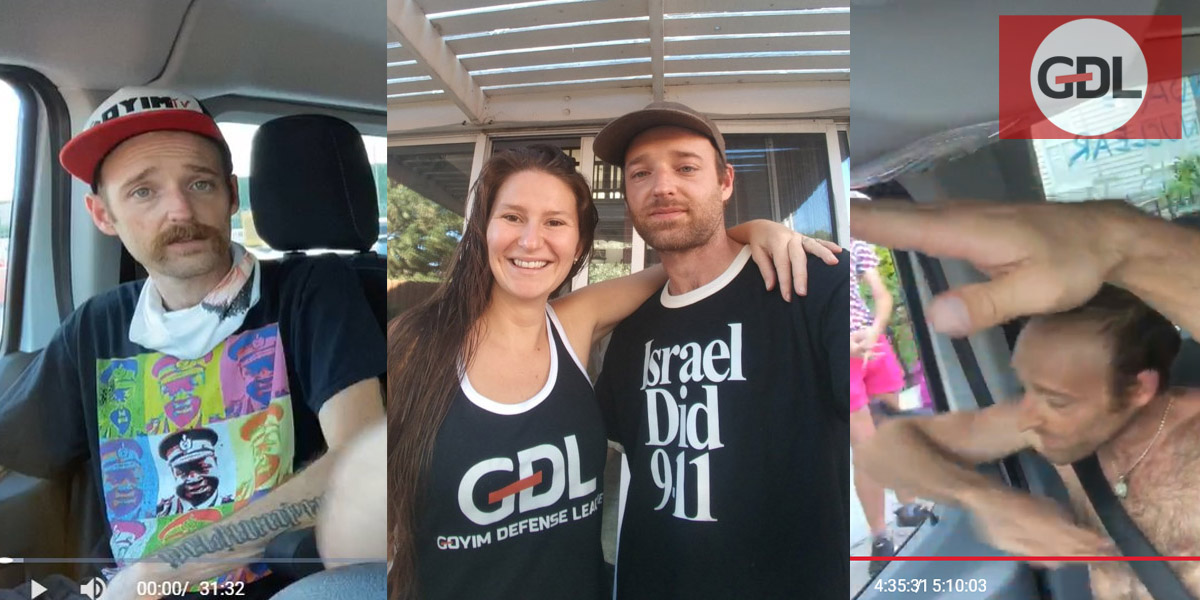 Vincent Bertinelli is a 33 year old Neo-Nazi, amateur YouTuber, and convicted felon who lives with his wife Briana and 4 children in Morrison, Colorado. Vincent and Briana make a living taking care of people with disabilities in their home for All Friends, Inc.

Vincent’s additional information, including his address can be found here

Vinny, Joey Bounds, and Jovi Val have traveled to Florida to participate in a hate bus tour with other members of the Goyim Defense League.

Yesterday, the Holocaust Memorial Resource & Education Center of Florida was the target of an antisemitic hate group. Their van, decorated with Holocaust denial and hate filled messages, pulled up to our driveway in an attempt to protest on our property. 1/ #Antisemitism pic.twitter.com/fuc7X64K27

They had their tires slashed at Pulse nightclub.

Neo-Nazi Jon Minadeo of the Goyim Defense League is now banned from Enterprise and Alamo nationwide after his tires were slashed after he lead a homophobic protest outside of the Pulse nightclub in Florida. Jovi Val was also assaulted by a security guard. pic.twitter.com/7Nth3UaQfZ

Beginning on October 31st, 2019, Vincent along with members of the Goyim Defense League and the former Traditionalist Workers Party live streamed themselves harassing community members in Denver, Boulder, Longmont, and Fort Collins in a 4-day streak of hate crimes. The Nazis dressed as Hasidic Jews and rabbis, while yelling as passerby’s that “Jews did 9/11”, and handing out holocaust denial flyers.

Here's another one on the Brezel stand. Again, Steve Hildebran and Jon Minadeo. pic.twitter.com/9OO6fXTJ2b

Shout out to the Boulder comrades for scaring the GDL nazis off their streets and taking down all their flyers within minutes of them going up. pic.twitter.com/HBWCkBbiOi

The Nazis drove around in an Enterprise rental van that they covered in hate speech while yelling anti-Semitic drivel at drivers through a megaphone.

It seems community members took notice though – Steven Hildebran and Vincent Bertinelli’s cars had their cars vandalized, the rental van was keyed, and college students in Boulder defending themselves against this group of fascists.

In mid-October, Vincent and fellow GDL Nazi Joey Bounds dropped a banner over a highway in Lakewood that read “New World Order is a Jew World Order”. The two were immediately ticketed upon hanging it.

On Facebook, Vincent goes by Idii Amin, a reference to the notoriously anti-Semitic Ugandan dictator who killed 100,000-500,000 Ugandans during his 9 years in power. Vincent’s Facebook URL is https://www.facebook.com/ExposesNoses (now facebook.com/JewsDid911), a reference to his conspiratorial propaganda of connecting everything he sees as wrong with the world to Jewish people (Archive)

Vincent has spent 2019 antagonizing attendees of queer events with a cadre of other fascists:

When Vincent isn’t video taping queer people or calling them pedophiles, he is posting anti-Semitic videos to YouTube and Bitchute. Vinny’s content is usually him ranting about how everything he doesn’t like is an inside job by the Jews or (((people))) controlled by the Jews.

Vincent not only believes that was 9/11 an “inside job” but it was done by the “Jews”. On September 11ᵗʰ of this year, Vincent Bertinelli, Steven Hildebran, Joshua Yeakel, and Kenny Bertholomey (of Anonymous Denver) pretended to be Jewish men and walked around a Denver University campus saying they were responsible for the terror attack while passing out anti-semitic flyers

Vincent never shies away from National Socialism – he regularly appears on episodes of the Rollie Quaid radio show, a former writer of the National Socialist website The Renegade Tribune, alongside William Scott Planner (the self-described fascist who recently got out of jail for assaulting a protestor with a deadly weapon in Sacramento), Tom of the Voice of National Socialist Reason, Russell Frankland, and Joshua Yeakal, both members of the former Traditionalist Workers Party.

For Vincent, protesting drag events is part of a larger struggle against the perceived Jewish promotion of “degeneracy”, a code word for anything queer.

For me, this whole shit is about the Jew encompassed in it. […] These people are not good people on a basic level, that’s what sets us apart.

-Vincent Bertinelli
“The Destruction of Morality”

On his streams, Vincent is happy to point out that the Nationalists in Germany (meaning the Nazi’s) outlawed homosexuality and trans identity, in part by burning research on gender, sex, and sexuality by the Institut für Sexualwissenschaft.

Vincent doxx’d his fellow Nazi Lucas James Martin when trying to raise money for him after his tires were slashed when he showed up to protest a LGBTQ+ event wearing a Sonnengrad and Nazi SS Totenkopf on his shirt. 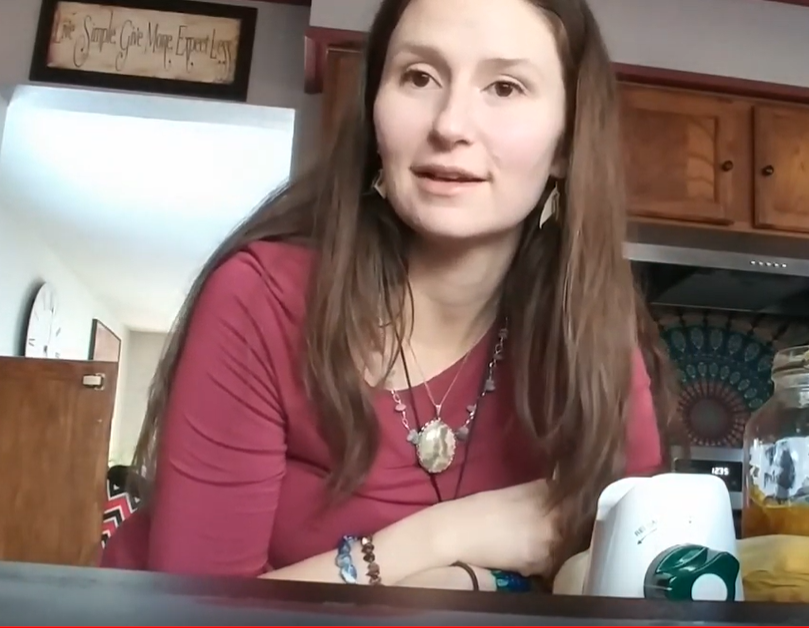 Vincent’s wife Briana (fka Briana Simonson) runs a natural and alternative health channel called Glowing Vegan where she discusses how vaccines cause autism, how fluoridated water destroys our brains, and how to sprout oats. Briana also has several interviews with quack doctor Lorraine Day  who believes that that cancer can be cured through dietary changes and that cancer has never been cured by conventional medicine. In these interviews, Dr. Lorraine Day educates Briana and the audience at large about how the government controls the weather, that the Allies in WWII were controlled by the Jews, that the holocaust death count is made up, and how Hitler did nothing wrong by rounding up the Jews and putting them into camps.

During WWII, Hitler just wanted the Jews out of his country because they were doing to his country what they’ve done to America: Bringing pedophilia, bringing homosexuality, bring in pornography, bring in everything to destroy the family.

Vincent, Briana, and most of the Nazis protesting the Mile High Comics drag events view the fluidity of gender, sex, and sexuality just as Hitler did: degeneracy brought in by the Jews to destroy western civilization, which is why they are so heated about the queer community proudly and boldy expressing themselves.

To prove this point, Briana has been pushing a GoFundMe in her husband’s livestream started by a user named “Aun Tea Cemite” (i.e. anti-Semite) to bring another anti-Semitic dork by the name of Handsome Truth to “to Colorado so he can join in exsposing J3wish Crimes against humanity!” 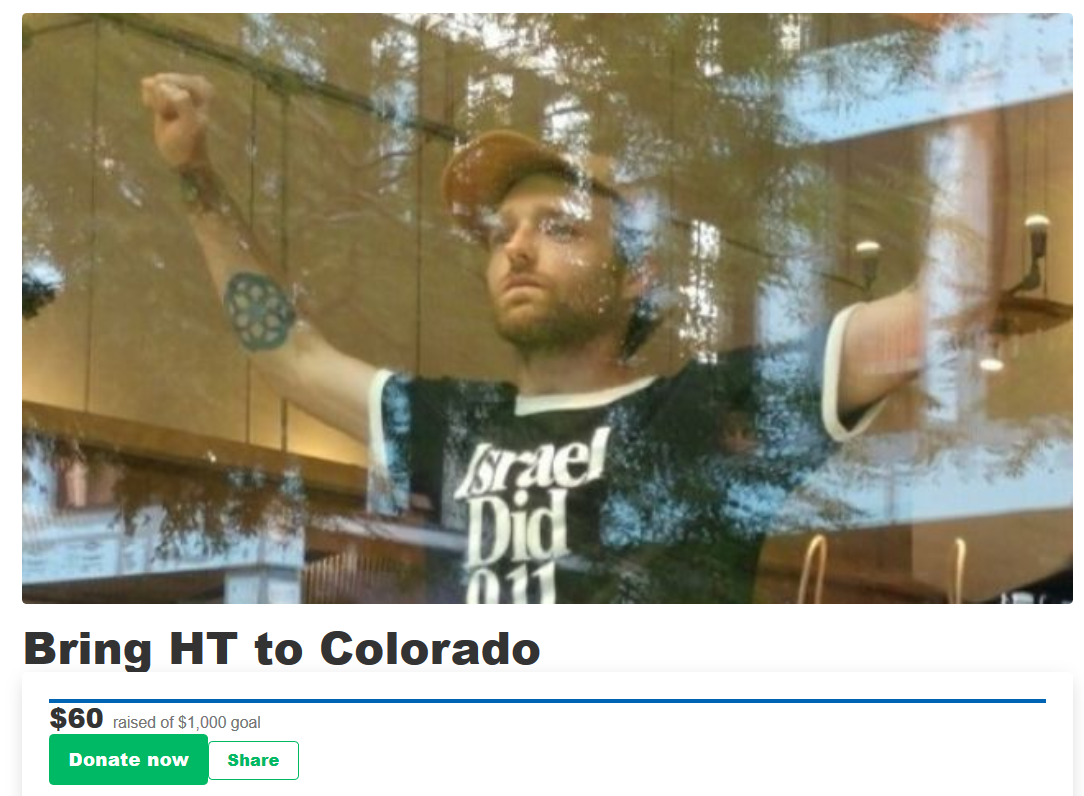 It looks like whoever setup this GoFundMe is doing so with their Facebook account of the same name, which lists Aurora, CO, as their address. The same city that Briana and Vincent live. 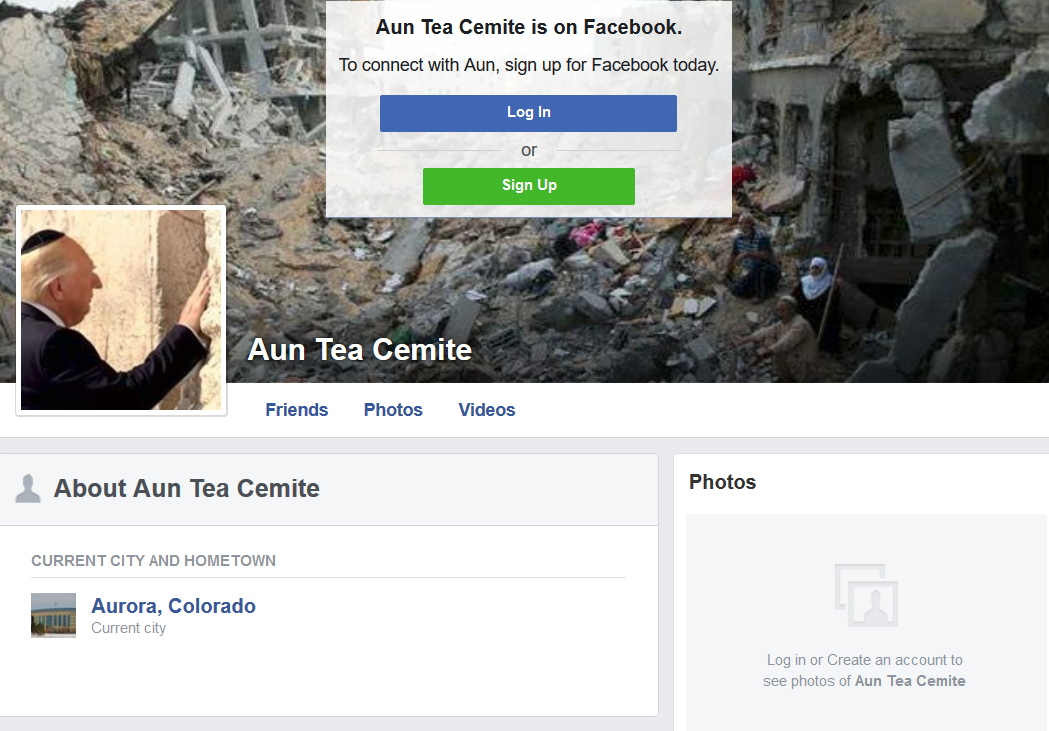 Potentially of note, Briana’s voter registration has her new last name as “Bartinelli”, which is a misspelling of Vincent’s last name “Bertinelli”.

Briana and Vincent like to bond over calling queer people pedophiles and discussing how Jews are everything that’s wrong with the world. This couple’s rabid anti-Semitism and queerphobia is a danger to their community and the broader Jewish and queer communities around them.

Briana and Vincent’s refusal to vaccinate their children is also extremely concerning.

Also concerning is the fact that these two neo-Nazi’s are in charge of taking care of people with disabilities. How will they treat someone who is assigned to them who is Jewish or queer?

It might be worth letting All My Friends Inc. know that they are paying neo-nazis to take care of their disabled clients:

White supremacy takes many forms, whether it is the ICE concentration camps that dot this land, ecofascist mass shooters in Texas, or alternative health Christian fascists in Aurora. We will identify each and everyone of you and make sure that you will never shake the label of “white supremacist” again.

You chose your path, this is ours.

We have updated some info.