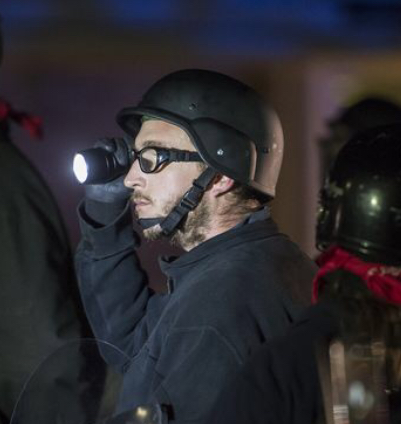 Russell Bert Frankland of Lakewood attended Unite The Right as a member of the neo-Nazi Traditionalist Workers Party. Since the collapse of the TWP, Frankland has continued his fascist activism by regularly attending drag queen story hour protests, pasting holocaust denial flyers, and harassing journalists.

Russell Bert Frankland has had quite a year. This summer, he was seen at recurring protests outside of Mile High Comics’ monthly all-ages drag show. As one of the main organizers of these demonstrations, Frankland and his BFF Joshua Yeakel were featured as guests on the podcast of infamous “crying nazi” Christopher Cantwell, where they claimed that these inclusive, kid-friendly events were part of a “Jewish onslaught of child sexualization.” Here’s Frankland at the July event, armed with a knife and shield.

Although Russell himself wasn’t seen at the September protest at Mile High Comics, most of his Neo-nazi and Proud Boy friends returned again to harass the innocent families lined up outside. The guest list included several Proud Boys, Josh Yeakel, Patriot Front’s Sam Cordova, and the following holocaust-denying members of the “Goyim Defense League:” Joey Bounds, Steve Hildebran, Vincent Bertinelli, and Lucas Martin. But this time, they were also greeted by an army of a couple dozen antifascist counter-protesters.

Leading up to Halloween, Frankland was seen protesting outside of a haunted house with one of the preachers who also protested outside of Mile High Comics. This tells us that he is deliberately coalitioning with other, less extreme right-wingers and conservatives, probably in hopes of radicalizing them. 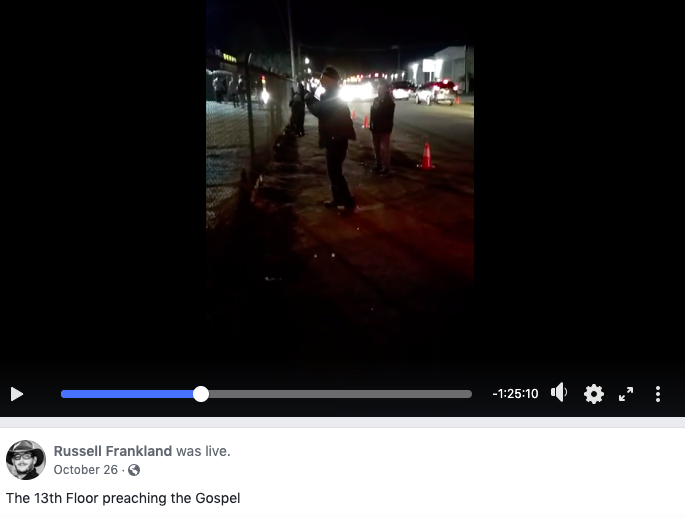 And just when we thought these people couldn’t get any worse, at the beginning of November, Frankland joined the aforementioned “Goyim Defense League” on their “Name the Nose Tour” of the Front Range, where they posed as rabbis and harassed pedestrians, leaving trails of anti-Semitic propaganda around areas of downtown Denver, Boulder, and Fort Collins, outraging local communities and making international news.

Guess what else we discovered? Frankland claims to be a member of the Knights of Columbus. Do they allow Nazis in their organization? We have a feeling they wouldn’t be too happy if they found out what Russell was up to in his free time. 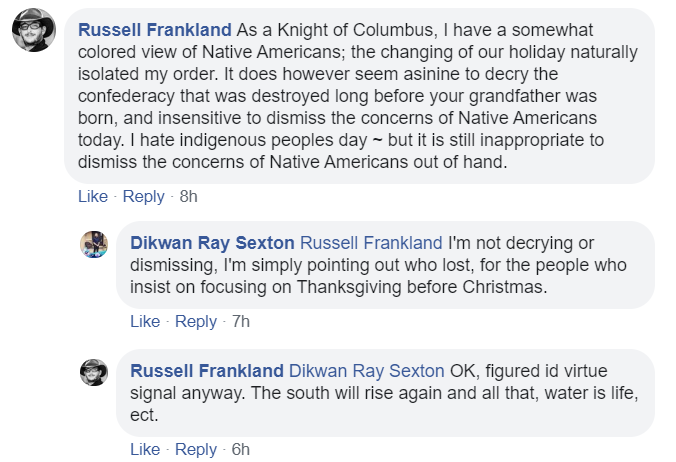 So anyway, that’s Russell, and he should be ashamed of himself. To all the Nazis out there, merry crisis and a happy new fear!

2018 has been busy, folks. We started off with a ridiculous snowball fight with some Proud Boys and Martin Meyers at the Womxn’s March that is barely worth mentioning and had a major confrontation with members of the Traditionalist Worker Party at a Turning Point USA Event in Fort Collins, Colorado. The week prior to the event, five people were spotted putting up “My Borders, My Choice” and “It’s Okay To Be White” flyers. They yelled “See you Friday, Fa**ots!” at participants in an anti-Trump noise demo in Fort Collins.

During the TPusa event, a contingent of masked, armed men chanting slogans like “Blood and Soil,” and “Jews Will Not Replace Us” showed up as the police were kettling a coalition of anarchists, IWW members, and members of the Front Range John Brown Gun Club away from the event. You can see Unicorn Riot’s coverage of the incident below (CW: Racial Slurs, Violence):

One of the Traditionalist Worker Party members has been identified as Russ Frankland of Golden, Colorado.

Russell “Russ” Frankland used to post on the daily stormer with the username “BrabarossaUSA,” a reference to Operation Barbarossa, the Nazi invasion of the Soviet Union during WWII. Which failed, miserably, by the way. He’s buddies with Aureliuss and Josh Yeakel. He’s been hanging with the Stormer crowd since at least March of last year, when he was spotted with Yeakel at a march at the Denver Capitol. 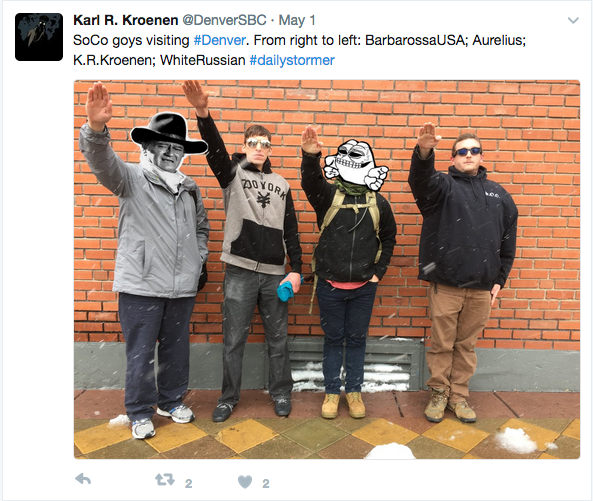 Russell lives in Lakewood, near Golden, but he works at Frankland’s Food Management, a family business.

In addition to Frankland, we believe these members of the flyering group correspond to these Nazis from the 2/2/2018.

If you can identify any of these guys we’d love to know, so please contact us if you have any information. But be careful, because they are Nazis who have a habit of violently assaulting people.