Louie Huey is a second degree Proud Boy and the host of the livestream podcast Major League Liberty. When Louie isn’t drunkenly yelling about Antifa™ into his computer he’s organizing with Neo-Nazis like the (former) Traditionalist Workers Party and the Goyim Defense League. Louie bills itself as libertarian, but is largely a mouthpiece for Trump supporters. Case in point: Roger Stone was a recent guest. Louie is very active in the Denver area, covering rallies and events of interest to the “blue lives matter” crowd. Louie is also not above “hitting the streets” for some ridiculous “gotcha”-style journalism, and has become a well-known nuisance for Denver-area activists.

Louie Huey has been very active at anti-COVID lockdown protests over the past couple of weeks. He met Alex Jones in Austin, then drove back to Denver on 4/19/2020, where we saw this hilarious exchange

Last weekend, chuds were protesting the COVID lockdown at the capitol building in Denver. Here they are complaining about how our governor, Jared Polis is another "Jeffrey Stalin" ???? pic.twitter.com/jCqnQx9HJD

Louie showed up again to the capitol this weekend with neo-Nazi Proud Boy Shane Reeves. 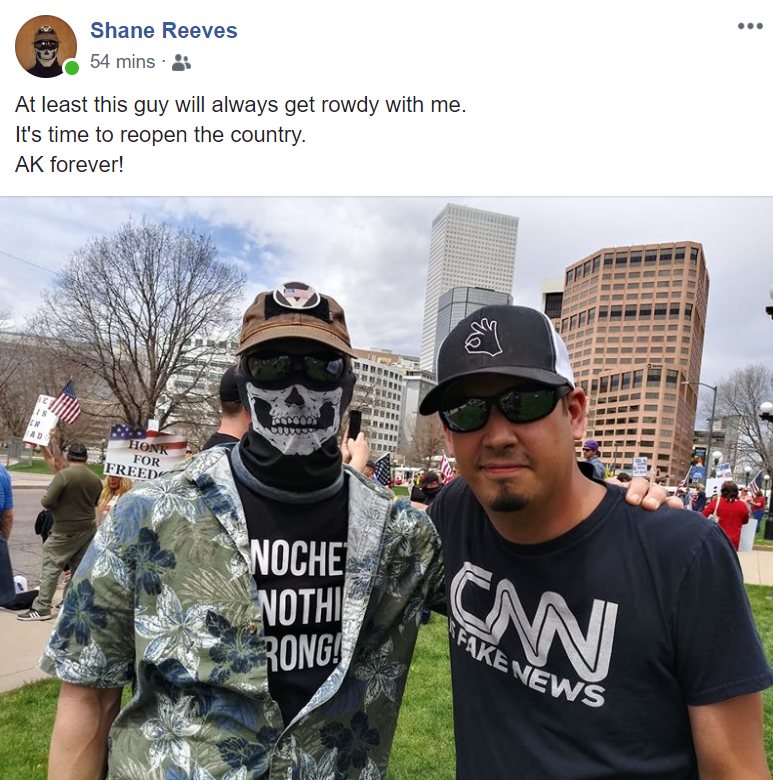 Since we last published on Louie Huey, him and and his Colorado Proud Boys have repeatedly attend protests with white nationalists and Neo-Nazis. Here’s Louie giving a fist bump to Neo-Nazi Steve Hildebran at an anti-LGBT protest outside of Mile High Comics.

Hi Louie,
Care to comment on this clip of you giving a pound to neo-nazi Steve Hildebran while he was wearing a Nazi SS Totenkopf on his shirt at a rally advertised with swastikas? pic.twitter.com/cj5ONds0wK

Louie Huey was recently featured in a series by 9News about the rise of hate crimes in Colorado, alongside Patriot Front vandal Samuel Cordova, and Atomwaffen figurehead James Mason.

His full name is Louis Zachary Huey (archive) and when he isn’t riling up Trump voters he works for Huey Construction (archive).

Huey got his start rubbing elbows with established fascists during the summer of 2017, which saw a rise in “Freedom Rallies,” grass roots versions of the ACT for America protests. These freedom rallies became big events for “patriot” groups like the Hiwaymen, who were associated with Castle Rock, CO resident Joe Geneva.

Not only does Huey cover local fascist gatherings, but he also traveled to Portland, OR last summer with Proud Boy Zach Lightner to take part in the street violence inspired by Patriot Prayer leader Joey Gibson.

Most recently, Huey and company attempted to harass a local Denver activist during their court date.

Huey was harassing an activist who was arrested at an free-speech event Huey sponsored, which resulted in a Colorado State Patrol trooper being placed on leave for over concerns that he collaborated with Proud Boys & Major League Liberty.

Huey is also a member of the FB group Patriot Brigade – Colorado (archive), which engages largely in 2nd Amendment activism, but also dabbles in the kind of racist, homophobic bullshit you would expect. The group was started by David Huntwork (archive) a local conservative activist who has a lot of facebook profiles (archive 1) (archive 2).

Interestingly enough, Huntwork lists his employment as “National Security Background Investigations Contractor.” If this is the guy who is doing background checks for security clearances, it certainly explains some things! 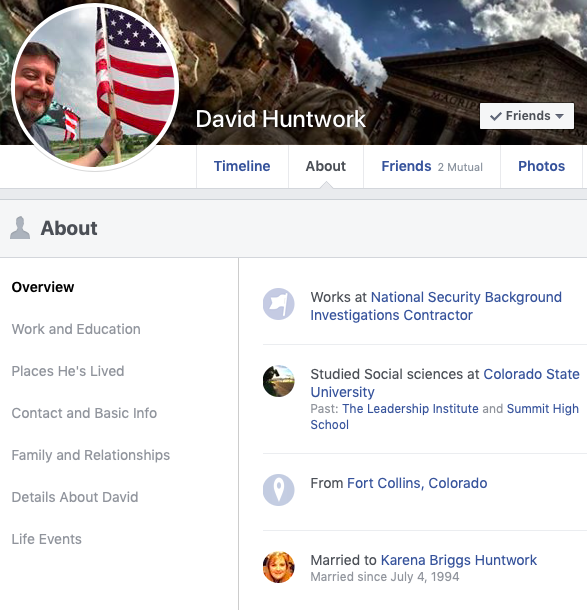 Louie Huey runs with a pretty fascist crowd, and is a part of the propaganda machine that promotes hate against immigrants and trans people. He’s connected to Proud Boys, militia groups, and is more than friendly with local law enforcement.

UPDATE 2: Huey thinks that Hardcore and Punk was at some point in time, not political. 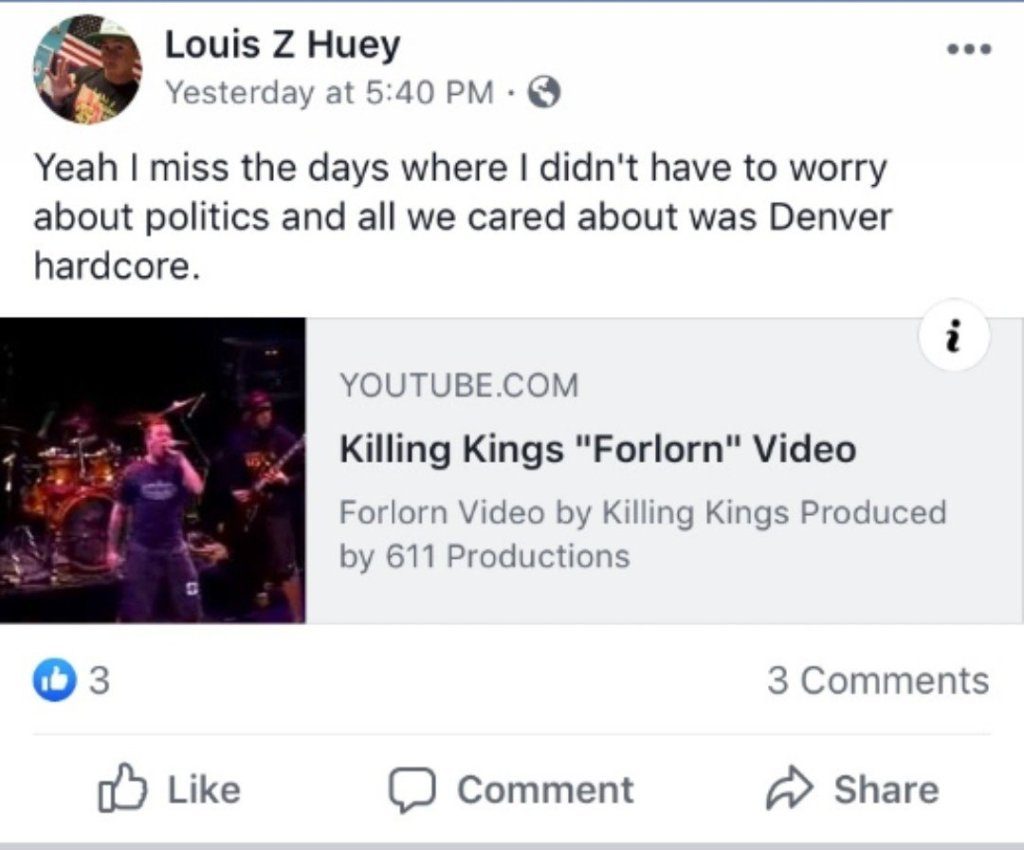 The band’s biography literally describes them as a political band:

This just underscores what the right actually means when they complain about how “everything is political now”. Something being “political” means having or reflecting politics they don’t agree with.